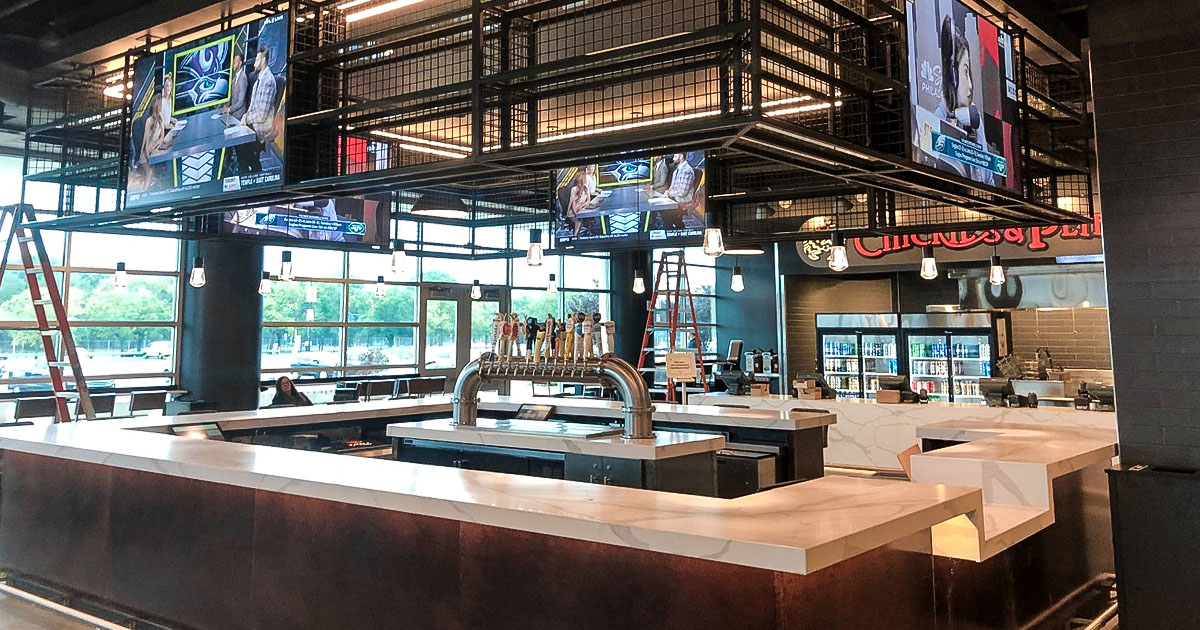 With NHL and NBA season looming, Wells Fargo Center and StructureTone Construction Management turned to Ernest D. Menold, Inc. to build drink rails, bar supports and architectural frames for the Wells Fargo Center’s grand opening of the “New City Terrace.” An addition to the scope of work included monitor supports and beverage racks above the new Bud Light Zone Bars under aggressive timelines and complicated structural issues, the crew at Ernest D. Menold, Inc. made the owners, and most importantly, the sports fans happy.

The project involved demolishing private boxes in the arena’s top level to create an open gathering space, called the Philadelphia Assembly Room, complete with bars, televisions and fireplaces. Ernest D. Menold, Inc., (Lester, Pa.), was awarded the opportunity to build the drink rails that run around the entire perimeter, the frames around the fireplaces, and other architectural items. The work performed this summer was part of a $250M renovation to the arena.

The contractor fabricated 45 individual powder-coated steel drink rail sections of various lengths, totalling 560’ of fixed drink rails, along with an additional 13 sections of removable rails to ensure American Disabilities Act (ADA) compliance. The design included a 3/8” plate, a 1 1/2” diameter schedule 40-pipe footrest, and a 4’6” high stand with a granite top (built by another company). It involved 506 hours of shop fabrication and 396 hours of field installation.

Though the sheet metal contractor has constructed similar rails, company president Ernest J. Menold points out this project was slightly different. “It was a very aggressive schedule. It had to be done during the summer. Our work was some of the last work that went in, and it had to be ready for the beginning of the Flyers and 76ers seasons.”

Partway through the installation of the railing system, they were approached to do the Bud Light Zone Bars. This work was on an even tighter timeline. Says Menold, “We got it at the end of July, so we had to be done in four weeks. That included helping the construction manager find a way to anchor these up into the building steel. We had to hire a structural engineer to approve our methods. This project was very, very aggressive.”

Though the team was a bit concerned by the number of uncertainties, they were also confident in their ability to complete the project. Menold points out, “We have a reputation of being problem solvers, so a lot of our customers bring us in to help solve their problems. And Wells Fargo is one of those customers.”

The Bud Light Zone Bars consisted of racks with four shelves made with 16 gage shelf supports for glass to be laid in. The frames are 1 x 1 x 1/8’ steel tubes with 2 x 2 x 3/16” steel wire mesh. Twelve framed openings allowed for mounting of television monitors (see image). Almost half of the 956 hours of shop fabrication were overtime, as were approximately one third of the 430 hours of field installation.

The team solved the challenge of fastening the bars by installing steel supports beneath the house steel of the Wells Fargo Center with the assistance of the structural engineer.

Ernest D. Menhold recognizes the uniqueness of the project. “It’s a custom fabrication. It’s probably not something we’ll make again, but it’s nice to know we completed it on time and on schedule for our customer.”