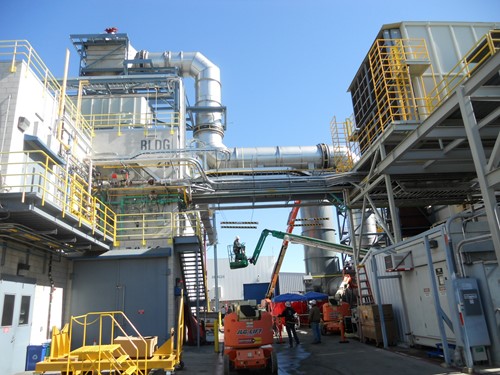 The system was engineered to sustain the extreme heat—between 1,700 and 1,800 degrees Fahrenheit—used to completely burn fuel and hydrocarbon residue produced during the testing process.

Performed final installation at 62 feet above the ground

Onsite installation included attaching the 84-inch diameter final piece of duct 62 feet above the ground to the exhaust diverter box, a 124- x 124- x 996-inch piece of duct with an attached 84-inch square-to-round adapter that weighed about 2,200 pounds.

It was not an easy job—no tolerance was allowed in the 90-degree angles and more than 2,000 5/8-inch round holes in companion flanges had to be made without a misalignment.

Even so, UMEC ended up with zero quality control issues and no rework required.

The customer, Solar Turbines, is a wholly owned subsidiary of Caterpillar Inc., with headquarters in San Diego. Solar Turbines’ products include gas turbine engines, gas compressors, and gas turbine-powered compressor sets, mechanical-drive packages and generator sets. Products from Solar Turbines play an important role in the development of oil, natural gas and power generation projects in some of the toughest, most challenging arctic, desert, tropical, and offshore environments. Solar’s fleet has grown to more than 15,000 units worldwide logging more than 2 billion hours in more than 100 countries.

UMEC was founded more than 90 years ago. The SMACNA contractor has offices in San Diego and Los Angeles, Calif., and provides design/build, design/assist, HVAC, plumbing, sheet metal, and process piping services for health care, biotech, water treatment, power generation and a wide range of other facilities.