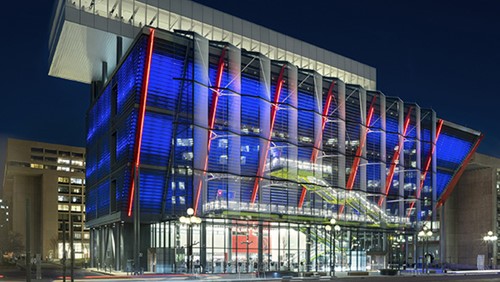 Stromberg's Mission at the International Spy Museum in Washington, D.C.

Your mission, should you choose to accept it, is to fabricate and install HVAC duct systems at the new International Spy Museum in Washington, D.C. This is a challenging mission that requires your special logistical skills and metal working abilities. This message will self-destruct in five seconds.

"We have been fortunate enough, working in the Washington area, to do work in most of the museums,” said Mike Tabor, Regional Executive of Operations for Stromberg, a SMACNA firm based in Beltsville, Md. “The Spy Museum project was not technically complex, but we did have to overcome some obstacles.”

According to Tabor, the greatest challenge was the limited access in the seven-story open space called the ‘veil,’ which features an exterior glass wall, a large open space and an architectural metal panel wall on the interior.

“Some of the supply ducts had to be installed through a fire-rated drywall partition, and run out through a temporary scaffolding system,” Tabor said. “The round duct also had to be installed on the same degree angle as a planned interior wall, which would be finished later, so diffusers could be attached from the outside after the wall construction was complete.”

Tabor said the precision placement of the duct required combining structural steel CADD drawings with the duct computer model to come up with, “the magical degree that our diffusers and supply duct would have to finish at.” It’s a spy museum, of course, so lasers had to be used. Stromberg used them to determine true horizontal elevations from the floor slabs to the center the supply branches.

“To help keep the glass wall from fogging up and to condition the massive open space,” Tabor continued, “the design had over 93, 12-inch round high throw nozzle-type diffusers that were installed horizontally in the side of the interior metal panel wall at several floor elevations.”

The bottom row of diffusers was approximately 20 feet above the first-floor slab elevation and the top row was over 80 feet up from the floor slab.

Tabor said there wasn’t a lot of workspace outside either, as the site was in the city’s busy L’Enfant Plaza. Duct work had to be shipped in loose pieces to the site, where it was then sub-assembled in sections by a prefab team.

“All of our work was first laid out in a 3D model and coordinated with all other trades,” Tabor added. “Our field foreman, Justin Tomko, was sent the coordinated drawings in paper copies and in electronic copies to be used on hand-held iPads.”

In total, the duct systems consisted of approximately 95,000 pounds of sheet metal for the core and shell, and approximately 37,000 pounds for the fit-out tenant spaces that were added to the original contract. The duct systems consisted of rectangular medium-pressure and low-pressure ducts, as well as medium-pressure spiral round duct. Stromberg also installed a 12-inch round boiler exhaust flue from the sixth-floor mechanical room up through the seventh-floor roof where an inline exhaust fan had to be suspended from a perimeter screen wall with heavy gauge structural steel angle gusset support frames. There were over 700 various air devices installed in many different types of ceilings — from basic office lay-in ceilings to highly complicated theater ceilings.

To enable remote control of many of the air flow dampers, the Stromberg team ran thousands of feet of electronic cables. They also installed over 100 feet of custom-made fan coil unit covers that had to be field-modified to match the window mullions that were already in place.

Approximately 60 percent of the installed duct was left exposed, then painted black so it blended in with the darkened ceiling spaces. By using Gripple cable hanging products, these exposed duct sections seem to be floating in the air. Tomko said it’s rewarding to know that museum visitors will be looking up at Stomberg’s craftsmanship.

“So many times, our work is concealed within walls or ceilings or located in buildings not accessible to the public,” Tomko explained. “This definitely makes you take the extra steps to ensure delivery of excellent quality craftsmanship and upholding Stromberg’s reputation as one of the leaders in this industry.”

Stromberg mobilized on site Spring of 2017 and finished the job early Fall of 2018, completing all tasks on time.

“The fun part of the project,” Tomko added, “was watching all of the exhibits come to life as the core construction was being completed and the next group of workers arrived building the scene — almost like a sneak peak of what the end result would look like.”

The International Spy Museum, which was moving from an old location into the new facility, reopened to the public on May 12, 2019. According to the museum’s website, visitors will find interactive exhibitions and installations, the foremost collection of spy artifacts in the world, and first-person accounts from top intelligence officers and experts.