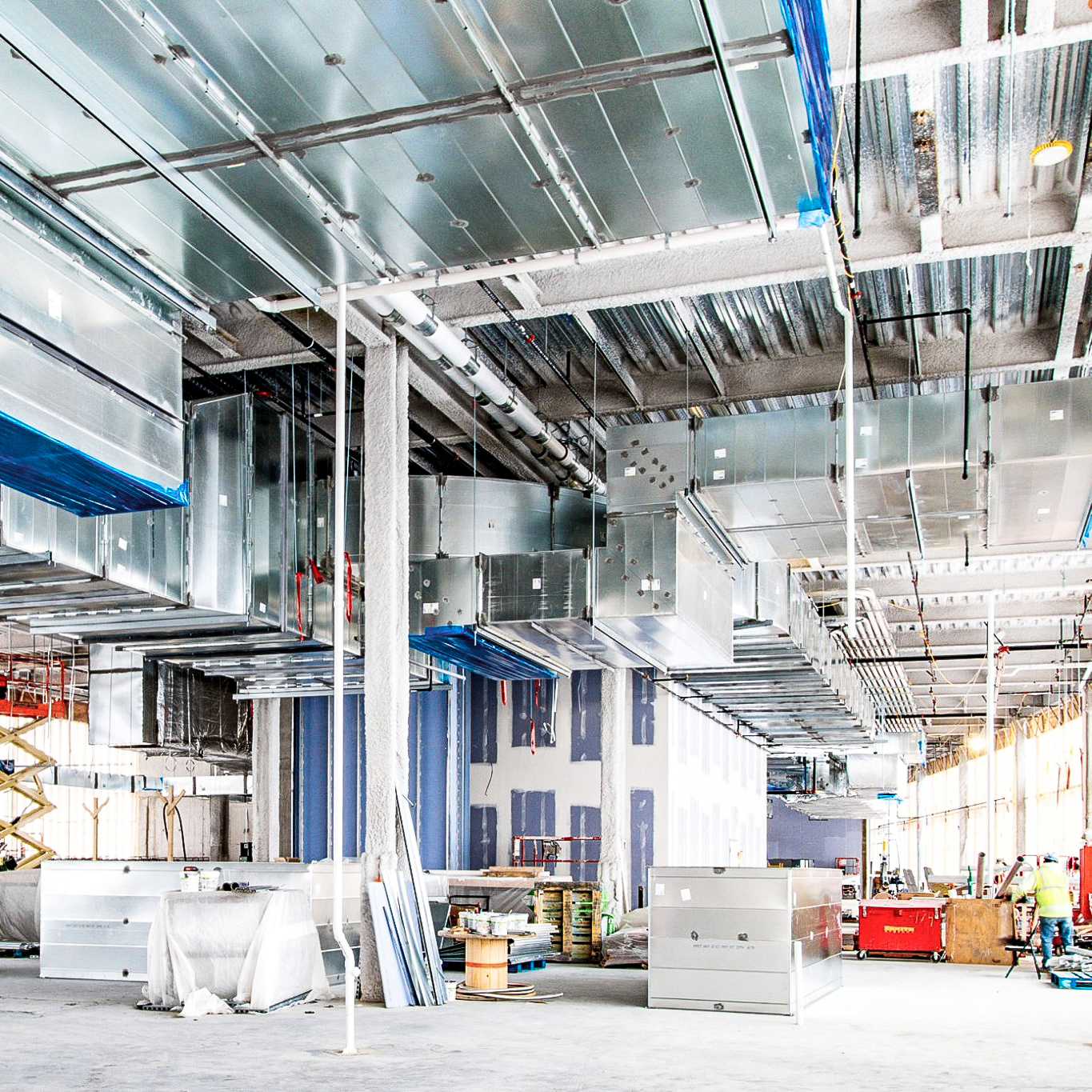 MetroHealth has been a bedrock of the Cleveland community for nearly 200 years. Founded in 1837 (one year after the city was incorporated) as a city infirmary, has grown over time into a thriving hospital system serving the people of Cuyahoga County, population 1.24 million.

The healthcare system is now undertaking a $946 million effort to expand its services and modernize its facilities. The MetroHealth Transformation project includes what MetroHealth describes as a “reimagining” of its 52-acre main campus. It involves a new hospital and outpatient center, parking garages, and 25 acres of green space with walking paths and gardens. MetroHealth envisions the hospital becoming the cornerstone of a sustainable EcoDistrict in the Cleveland community.

SMACNA sheet metal contractors are playing an instrumental role in making the MetroHealth Transformation a success. In the process, they’re demonstrating their expertise by working through unique challenges on the high-profile project.

A Major Undertaking
Cleveland-based T.H. Martin Inc., a full-service mechanical and plumbing contractor that employs roughly 200 people, has responsibility for all sheet metal work on the MetroHealth Transformation. T.H. Martin’s work on the MetroHealth Transformation started in early 2019. It should be finished in the spring of 2022. Martin estimates that roughly 75% of the sheet metal work will involve some form of prefabrication when all is said and done. The rough-in is currently about 70% complete.

In total, the company is installing 1.8 million pounds of sheet metal for the job. The entire mechanical plumbing contract for the project was valued at $100 million, with the sheet metal work costing more than $16 million.

“We’ve done projects this size, but not many,” says Tom Martin, the president of T.H. Martin who serves on SMACNA’s board of directors.

“This project is huge,” says Fatima Ware, president of WTD Mechanical LLC, one of a handful of sheet metal subcontractors coordinated by T.H. Martin on the MetroHealth Transformation project, thanks in part to the relationships Martin has developed as president of SMACNA’s Cleveland chapter. In addition to WTD Mechanical, T.H. Martin has farmed out work on the project to area companies Castle Heating & Air Inc. and Fatima Construction LLC.

COVID-19 Challenges
In addition to the sheer scope of the project, the COVID-19 pandemic has created logistical challenges for the contractors involved with the MetroHealth Transformation.

“The main rough-in on this project took place during the early days of COVID-19,” Martin says. “We were full-speed with over 60 sheet metal workers onsite during the summer.”

The company implemented many of the workplace safety measures that have become standard in the industry in the last year, including temperature checks for workers and sanitizing tools daily. Breaks for lunch and coffee have been staggered throughout the workday. Teleconferencing via Zoom with the site foreman and subcontractor partners has replaced face-to-face meetings.

Additionally, T.H. Martin had between 25 and 30 employees doing work for the job in its own shop. Social distancing and other coronavirus-related precautions forced the shop crew to work in two shifts. From April through September, the company had its shop up and running a total of 18 hours per day. Adding a second shift required T.H. Martin to identify another shop foreman and an additional handful of workers with specific skills in areas such as fabrication and welding.

T.H. Martin also had to adapt when workers contracted COVID-19 or had to go into quarantine after being exposed to the virus. That entailed juggling the schedules for some crews and hiring new sheet metal workers from the local union.

“That aspect on such a big sheet metal job for us was challenging, but we persevered,” Martin says. “It amplified the complexity.”

Mike Steidel, CEO and founder of Castle Heating & Air, and VP of SMACNA Cleveland, points out that simply moving forward as planned makes the MetroHealth Transformation a unique project in the COVID-19 era.

“A lot of the work at medical facilities is either on hold or the projects have switched since COVID happened,” he says. “Suddenly they’re going from normal construction or expansion to getting things ready for new services like rapid testing for the virus.”

Getting Creative
In terms of the actual design and construction work, the size of the equipment being installed at the job site presented more challenges. The dimensions of some pieces of ductwork measured as large as 168 inches by 82 inches. Moreover, under its agreement with MetroHealth and Turner Construction Company, which is managing the project, T.H. Martin could only deliver materials to the job site at specific times.

“It was really tough to make sure we got the equipment and ductwork on trucks or on trailers and to the job site in a timely fashion  to make sure we could unload it in our time slots,” Martin says.

The dimensions of the structure itself also forced T.H. Martin to get creative. Essentially, the company had to ship all of the prefabricated ductwork for the equipment room on the hospital’s top floor knocked down to the job site. A work area was set up onsite to then fabricate and assemble the ductwork.

“We almost had to put a shop on the job site so we could build the ductwork, reinforce it, seal it and anything else before we installed it,” Martin says.

Given that the hospital will have multiple cafeterias once it is completed, the contractors had to contend with about 300,000 pounds of black-iron 16 GA welded ductwork constructed to handle kitchen exhaust. To reduce the amount of welding required onsite, T.H. Martin tried to handle as much of the kitchen ductwork as possible through prefabrication.

Up to the Task
When it comes to major lessons learned from this project, Martin says T.H. Martin witnessed the importance of finding multiple leaders who could head small teams. He points out that the project involved workers separated into as many as eight different areas within the job site at one time on the facility’s total of 14 floors. As a result, identifying “sub-foremen” to head groups of workers became paramount.

“On a job this fast-paced and big, it was important for us to make sure we had the right people running the correct crews in all these different areas,” Martin says.

Overall, executives at the contractors involved with the project all agree that being involved with the MetroHealth Transformation will become a useful selling point for attracting new clients in the future. Martin notes that the hurdles imposed by the coronavirus ultimately gave the companies an opportunity to showcase their skills: “We’re up to the task and we’re performing at a high level.”