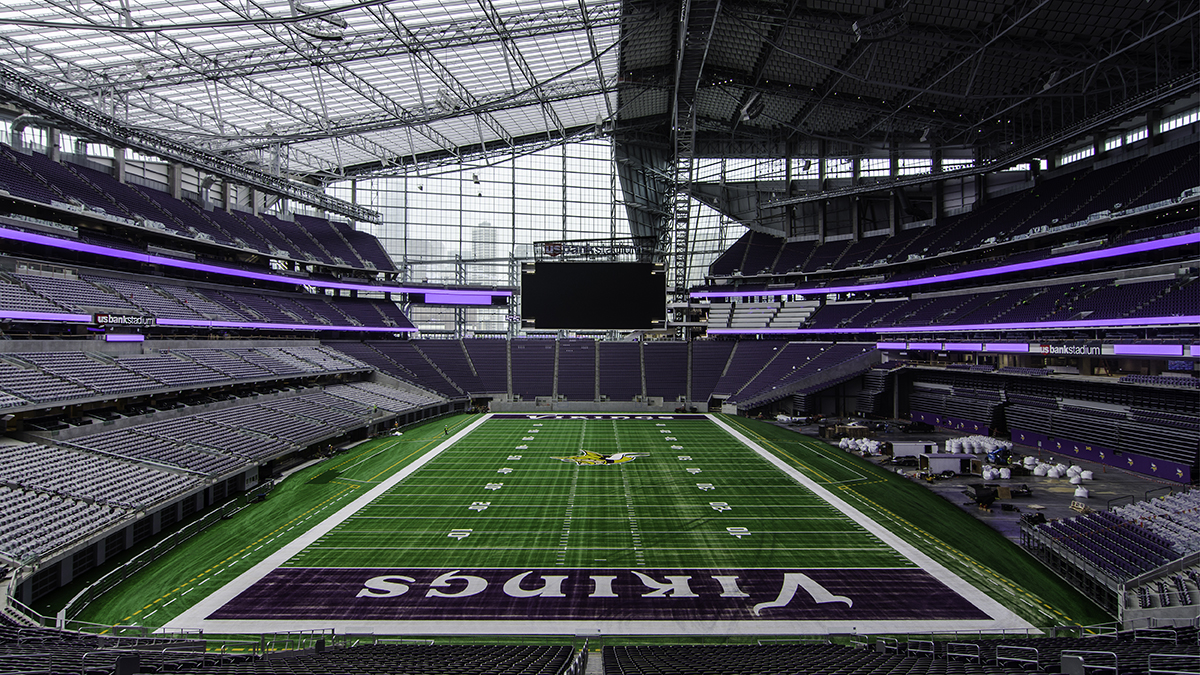 Winning a contract to work on the U.S. Bank Stadium—located in downtown Minneapolis and home of the NFL’s Minnesota Vikings—wasn’t just any old job for SMACNA contractor MG McGrath Architectural Surfaces in Maplewood, Minn. Nearly all the building’s surfaces are curved, making the digital model more important than ever for layout and design.

Further, that unusual curvature and size made installation challenging. “Sometimes we had to use a sling stage and 180-foot boom lifts just to pull ourselves onto walls,” said Dewey Roschen, field superintendent for MG McGrath. He’s been a Vikings’ fan from “back when they played outside in the cold.” On the new stadium, he logged eight to 10 miles of walking daily while on the project.For one of the largest structures in North America, MG McGrath craftspersons undertook the task of adding a black façade, which required approximately 420,000 square feet of VM Zinc interlocking metal panels. The contractor also installed nearly 2,000 subpanels complete with framing and insulation.

MG McGrath’s other exterior work was a vital part of ensuring that the stadium’s fixed, slanted, semi-transparent ethylene-tetraflouroethylene (ETFE) roof could withstand the brutal Minnesota winters. ETFE is a fluorine-based plastic designed to have high corrosion resistance and strength over a wide range of temperatures.

In MG McGrath’s shop, craftspersons fabricated and then installed snow diverters, which catch snow as it falls from the roof, allowing it to funnel through a heated basin and drain through a gutter system 50-feet-high and 270 feet off the ground.

The stadium seats up to 65,400 fans and, for major events, has the ability to expand to accommodate 72,000 people. It has seven levels (including two general admission concourses with 360-degree circulation and various views into the bowl), up to 116 suites and 8,000 club seats (some of which put fans closer to the sideline than at any other NFL stadium), 430 concessions, gift shops, restaurants, and a Vikings museum and Hall of Fame.

MG McGrath craftspersons worked on all of the 1.75 million square feet inside the stadium. They fabricated and installed custom finished metal in concourses, suites, locker room, concession stands, and bars. Materials included six miles of steel, blackened and clear-coated interior base, plus aluminum soffits, anthrazinc panels, and accent bands.

MG McGrath was not done even when work was completed on the stadium’s finishes. The contractor collaborated with Medtronic and the Vikings on a sculpture called the Horn, which represents the Gjallarhorn—famous from Norse mythology—that is sounded prior to all Vikings games. Located on Medtronic Plaza, adjacent to the west entrance of the stadium, the Horn monument is constructed using structural tube steel and plate steel framing, mirror finish stainless steel, and painted metal panels. It is embedded with LED lighting for visibility at night. The sculpture’s top stands 25 feet above the plaza and measures 30 feet wide and 107 feet from end to end. Its flowing, intertwined ribbons are meant to represent the spirit of partnership and progress in the community.

Although the sculpture looks like one giant, continuous work of art, it is comprised of seven different structures, including the sign wall that features Medtronics’s branding, four arches, and two cantilevers. To better deal with the complexity, MG McGrath used Gehry Technologies’ Digital Project, a computer-aided design (CAD) software application based on CATIA, which uses a visual interface. CATIA, developed by the French company Dassault Systemes, is a multi-platform software suite for CAD, computer-aided manufacturing, computer-aided engineering, project life-cycle management, and three-dimensional modeling.

The sculpture’s structures are made up of 16 different components and the entire monument weighs over 38 tons. MG McGrath crews in the contractor’s shop handcrafted the steel ribbons.

“Then we assembled it in the shop using a total station to ensure that the structure was assembled per the model,” said Lee Pepin, MG McGrath’s director of virtual design and construction. “Finally, we shipped and welded the pieces together on site.” MG McGrath used the scan on site to create fab drawings for the skin of the monument.

The final touches of the sculpture included over 700 linear feet of LED lights that intertwine the seven arches. “In just under one week, our crews were able to install all of the structure’s aluminum and stainless steel cladding,” MG McGrath Project Manager Katie Baldwin said. “The reflective skin, if you were to unravel it, would extend to over 400 feet.”

Despite the condensed schedule, limited space, and complexity for the project, MG McGrath craftspersons fabricated and erected the monument in less than three weeks. “It’s been an incredible journey to see this monument move from concept to reality,” said Rob Clark, Medtronic’s vice president of global communications. “It’s hard to get the full impact of the monument in pictures, but it’s truly impressive and unique.”

While the stadium has already been christened—the Vikings beat the Green Bay Packers there for the debut—and the Horn unveiled, SMACNA contractors and their skilled craftspersons will keep busy in Minneapolis for the next few years. U.S. Bank Stadium will host the 2018 Super Bowl, and the 2017 and 2018 summer X Games, and as a result, a significant amount of new development is underway, including the Wells Fargo Towers and nearby multi-family condominiums and restaurants.