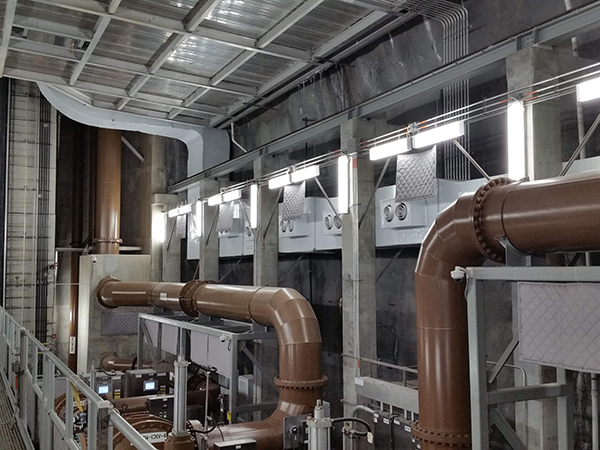 Like many cities in the eastern United States, Cleveland’s sewer and water treatment system is a combined sewer overflow, meaning that when it rains, storm water goes through the same sewer system as sewage. During heavy rains, most combined sewer overflow systems can’t handle the volume, and untreated sewage is often released into waterways. City after city has embarked on sewage and water treatment infrastructure projects to fix this problem, and a SMACNA contractor played a key role in a major project for the Northeast Ohio Regional Sewer District.

First, the city of Cleveland constructed an underground storage tunnel system in the Collingwood neighborhood to retain storm water and sewage. Then the Easterly Tunnel Dewatering Pump Station was built to dewater the underground storage tunnel system at the end of each wet weather event and pump the combined sewage and run-off to an interceptor facility for transport to the nearby Easterly Waste Water Treatment Plant.

“The pump station is one of the largest in the U.S,” said John E. Sickle Jr., president of Duct Fabricators Inc., Cleveland. “The dewatering pumps direct the flow horizontally and eventually upward to the interceptor facility.” Since the huge dewatering pumps generate a lot of heat, Duct Fabricators was engaged to provide the HVAC system to keep the pump station room cool.

The actual pump station room is 240 feet underground in a "cavern-style" structure. The cavern is approximately 185 feet long by 45 feet wide by 60 feet in height.

At grade level up at the surface, the 12,600-square foot pump building houses a mechanical equipment room and an electrical switch gear room. Two shafts extend down from the pump building to the pump station in the cavern. The main shaft is 45 feet in diameter and contains an elevator, main stairwell, HVAC ductwork and piping. The auxiliary shaft is 40 feet in diameter and houses the auxiliary stairwell, HVAC ductwork and piping.

The cavern contains seven massive dewatering pumps and two auxiliary pumps. The dewatering pumps have 1,600-HP motors on each pump and have the capacity to pump 40 million gallons per day. All that horsepower requires cooling to keep the motors from burning up, and that’s where Sickle and his team at Duct Fabricators came in.

Duct Fabricators was contracted to furnish and install all HVAC equipment; rigging and craning of the mechanical equipment; fabricating and installing sheet metal ductwork, the HVAC piping system, and the external insulation; and providing the controls and performing testing and balancing.

The specifications required the cavern to be maintained at 55 degrees Fahrenheit. The supply and return ductwork is made of single-wall aluminum, 72 inches by 60 inches. Aluminum was selected because of its resistance to corrosion.

All hangers and supports were C10 channel-type hanging brackets and were attached to the concrete shaft walls and structural columns in the cavern. All brackets in the shafts were installed in such a way to allow for the supply and return duct risers to be lowered into the shafts in 20-foot sections and to slide through each support bracket until the riser section reached its final resting position. Duct Fabricators used the T.D.C. (SMACNA T-25A flanged joint) type connections.

When the ductwork reaches the cavern, it turns and runs nearly the entire 185-foot length of the room, where it’s distributed through high-velocity outlets capable of delivering 1,800 CFM.

Up in the pump building, each rooftop unit delivers 38,500 CFM to the supply air riser ductwork in the shafts and into the cavern. Supply air external static pressure was designed at 3-inch WG and the return air at 1.5-inch static pressure. All ductwork was constructed in accordance with SMACNA 3-inch WG classification.

It took 18 months to fabricate the ductwork. Duct Fabricators biggest challenge, Sickle says, was the coordination, fabrication and timely installation of the aluminum duct risers. Duct Fabricators maintained an average crew size of six trade persons throughout the project, with a peak of 12 when the riser shaft ductwork and cavern ductwork were being installed simultaneously.

Duct Fabricators and its employees recently won three Craftsmanship Awards for the project. Robert Wingeier won in the category for HVAC system installation, Scott Savage was the winner for HVAC system implementation, and Jesse Sickle won for HVAC ductwork fabrication and assembly.