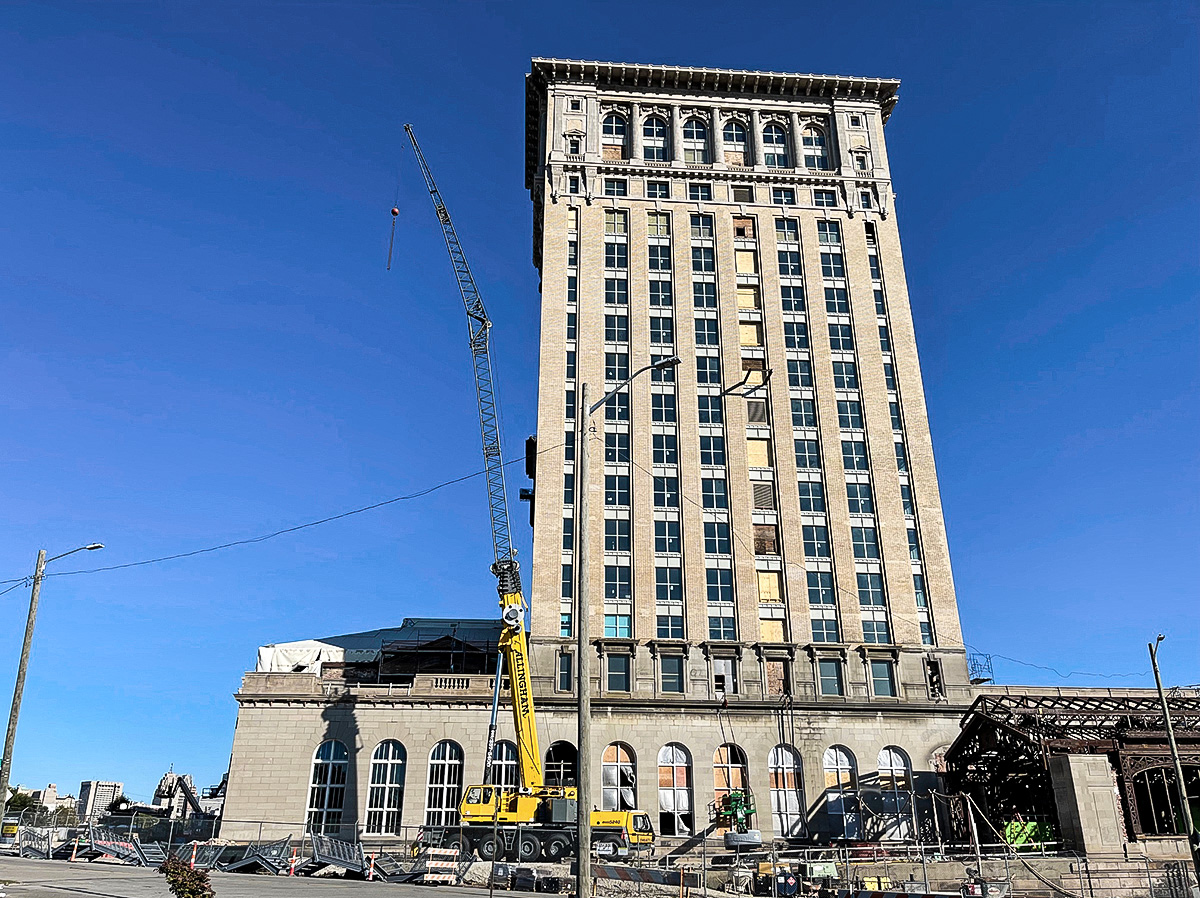 Architectural: Back on Track

At 11:30 a.m Jan. 5, 1988, an Amtrak train left the Michigan Central Station for the last time, bringing 75 years of passenger service in Detroit to a permanent halt.

It seemed like the end for the station, a National Historic Landmark that in its heyday brought thousands of new residents each day to the city to look for work in the city’s auto plants and parts factories.

Fast forward to 2018, when the Ford Motor Co. announced that it was buying the facility, its adjacent 13-story office tower and the surrounding buildings with the intent to spend $740 million restoring the abandoned station and making it their heart of an “innovation hub” where 2,500 employees would work on autonomous and electric vehicles.

Among the many construction companies working on the station is SMACNA member Custom Architectural Sheet Metal Specialists of Detroit. Better known as CASS Sheet Metal, CASS is no stranger to high-profile projects in the region. The company’s architectural portfolio includes the Michigan State Capitol and Perry’s Victory and International Peace Memorial, a 350 foot-tall Ohio tower commemorating the Battle of Lake Erie during the War of 1812.

Originally designed in 1912 using the ornate Beaux-Arts style by some of the same architects who were also involved in the construction of Grand Central Terminal in New York City, the Michigan Central Station features multiple copper roofs including 20 copper-framed skylights in its barrel-vaulted ceiling. There are also several massive floor-to-ceiling windows. As part of the refurbishment, which is scheduled to finish by the end of next year, everything from the masonry to the ornamentation is being recreated or restored.

Overseeing CASS’ work on the station is company owner and President Glenn Parvin. About eight of his employees are working on the project. Using over 35,000 square feet of 16-ounce Revere copper, they’ll be fabricating the roofing panels, in shop and on site, in preparation for installation. The battens are 3 ½ inches wide by 1 ½ inches high. Twenty-ounce copper will be used on the deck and gutters at the roof’s perimeter.
“It’s a very, very detailed job,” Parvin said.

As of late October, CASS was installing the waiting room’s underlayment, which includes 2-inch insulation, plywood, and the ice and water shields that protect the roof’s concrete deck structure.

Copper work on the waiting area roof is slated to begin in spring of 2022.

At the rear concourse, underlayment work has been completed. The standing-seam roof installation will begin after work is done on the station’s skylights — likely mid-November.

The existing roof and its support structure is in bad shape, Parvin said.

“You have to remember that this building has been sitting vacant for the better part of 40 years,” he said. “The copper was all pillaged off the roofs by scrappers. They’re actually replacing a lot of structural steel in certain places.”

Although CASS has worked on many historic restoration projects in and around the Detroit area, the batten system used on the station’s copper roof is a type that CASS hasn’t done before.
Parvin said they’ll be consulting industry publications, along with their knowledge, to figure out the best way to install it.

“We rely heavily on the SMACNA architectural manual, Revere’s Copper & Common Sense, and best practices from our years of experience,” he said.

CASS will be using a roll former to produce the roof panels, along with a custom-made seamer. Workers will be using hand tools they designed themselves to make it easier to create the folds the copper panels require.
Although he’s worked with many types of metal, Parvin said he always prefers copper.

“I love it,” he said. “Copper is great to work with, as opposed to trying to deal with stainless or titanium, which is very springy. You can do a lot more with its pliability. It’s a roof system that generally (lasts) 75- to 100-years plus. So bar none, it’s the superior system of choice for lifecycle cost and protecting a building of this magnitude.”

As a lifelong area resident with a passion for the city’s early 20th century architecture, Parvin said he’s honored to play a part in bringing back a major piece of Detroit’s history.

“I have been blessed to do many historical restoration projects,” he said, “(but) this project is near and dear to me. My mother grew up blocks away from the station. I needed to be involved in this project.”