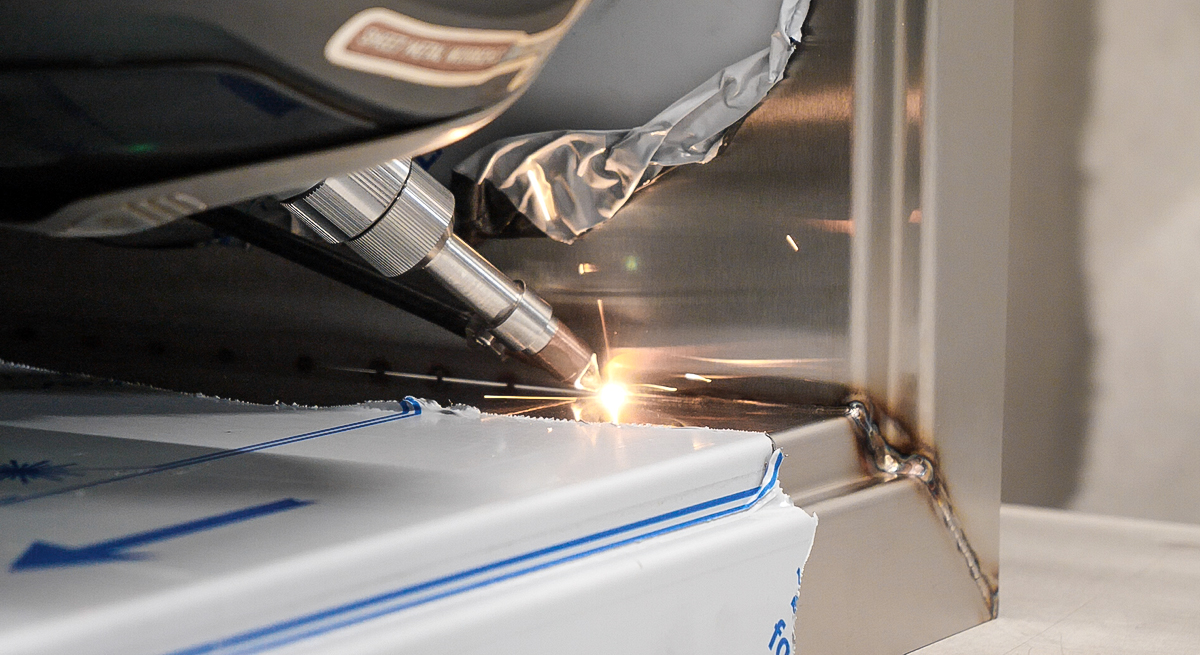 Architectural: The Future of Welding

Innovations in laser welding and the adoption of high-power fiber lasers have created new possibilities in the shop and field. But this new technology has also increased the necessity of prudent safety measures.

Joseph Lansdell, president of Poynter, headquartered in Greenwood, Indiana, said that they purchased the LightWELD from IPG Photonics Corp. for use in their specialty metal division, which handles everything from ornamental railings to pharmaceutical fabrication builds. While they would typically use TIG welding for these types of jobs in the past, this new laser welding technology is allowing for increased efficiency and speed. Lansdell says it has also been able to deliver consistently high-quality results while reducing the level of experience needed.

“It can take years to become really proficient at TIG welding but even novice welders can ramp up quickly on this new laser technology,” Lansdell said.

With the new laser technology, welding fixtures are simpler or not needed at all, metals need not be pre-brushed or ground clean, and post-processing polishing is greatly reduced.

Jordan Colwell, process engineer for A. Zahner Co., based in Kansas City, Missouri, added that in addition to the efficiency and speed, another benefit is that the laser also requires less heat.

“Because it has a smaller heat affected zone coupled with increased speed, when we evaluate a job with welding, if it can go to the laser welder, that’s our first pick,” Colwell said.

Another benefit has been minimized cleanup. Lansdell says that the machine has a mode in which you can clean your weld site using the same hand-held device.

Prioritizing Safety
Because this type of laser technology can burn the retina, it’s imperative that safety is prioritized. For companies that have adopted this laser, effective training and proper utilization have been key.

Lansdell says the company built a customized room in the shop and linked the doors to the power so that the unit could only be run with the doors closed. They also use laser-safe safety glasses when operating
the unit.

“We realized all of our safety measures might be overly cautious but in terms of protecting eyesight, we just don’t want to take any chances,” he added.

Colwell said that at A. Zahner, they trained a Laser Safety Officer (LSO) before deploying it on the floor.

“The main takeaway was the importance of proper PPE, including the laser-safe glasses,” Colwell emphasized. “Otherwise, the PPE is similar to the gear you would wear for regular welding, like long sleeves, gloves, and your welding hood. Special considerations include laser-safe enclosures and limiting welding to a contained area so that others are protected from
the beam.”

Colwell added that the company built its own set of welding screens to satisfy the safety requirements while keeping the system mobile—as mobility was a key reason they invested in it.

“The system we have does not require a separate cooling tower so it’s very portable,” Colwell continued.

“We wanted to do what we could to maintain that portability.”

Minimized Learning Curve and New Possibilities
Once welders understand the special safety measures, the machine itself is easy to use with minimal learning curve.

“From what we’ve seen, the way that the laser guides the beam and directs the pool, you can do much more intricate pieces of welding,” Colwell said. “As long as someone can follow a line and maintain a consistent speed, the machine handles the most complex parts of the process.”

Colwell added that this technology has also opened the door to new possibilities like copper to stainless steel and stainless steel to carbon steel — welds that wouldn’t be seen with traditional welding.

Plus, Colwell said that this technology has expanded their flexibility when welding dissimilar and exotic metals—welds that would have been significantly harder or impossible with traditional welding.

All of these various benefits make this laser technology a valuable addition to the shop and/or field.